Rediscover freedom on a 2022 Voyage.


From palm-fringed beaches to iridescent glaciers, Cunard’s new 2022 voyages offer journeys laced with intrigue and wonder, where the everyday has never felt so far away.

A holiday with Cunard is an escape into another world. Where the ordinary is extraordinary and untold possibilities abound. Where time unfurls at your own pace and life’s greatest pleasures are yours to savour.

Welcomed wherever she sails, Queen Mary 2’s 2022 itineraries offer a chance to embark on iconic journeys celebrating feats of man and nature. Experience the romance of arriving into New York on the deck of the world’s most famous ocean liner, or the wonder of witnessing the Northern Lights against the pin-drop silence of Norway’s fjords. Queen Mary 2’s style, elegance and freedom of space are legendary.

Stir your senses with Queen Victoria’s 2022 itineraries: From the magic of the ethereal North Cape, and scenic cruises around Britain, to sunshine-filled days in the Mediterranean and Iberia. Savour the lunar-like volcanic landscapes of Lanzarote or the Moorish architecture of Lisbon’s Alfama district; an area older than Rome. Queen Victoria’s elegance and refined style enchant all who step on board.

2022 sees Queen Elizabeth return to Alaska, with port calls in Japan and the Western Mediterranean among her enticing itineraries. Explore the Last Frontier with a scenic cruise through Glacier Bay. The cultural awakening continues in Italy, where Rome’s historic Colosseum, Pisa’s leaning tower and the ruins of Pompeii are among the sights to savour. Queen Elizabeth’s world is elegant and inviting.


Set sail with Cunard and escape into an unrivalled world of freedom. Experience the vastness of the ocean and stroll beneath the sun and stars as nature drifts by. Discover new shores across the globe; explore the majestic scenery of the Norwegian Fjords, marvel at Alaskan flora and fauna, or traverse the Atlantic in style and wake up as Lady Liberty sails past to greet you.

With spacious decks, refined restaurants, elegant bars and cosy snugs you'll be able to while away each day, doing as much or as little as you choose. 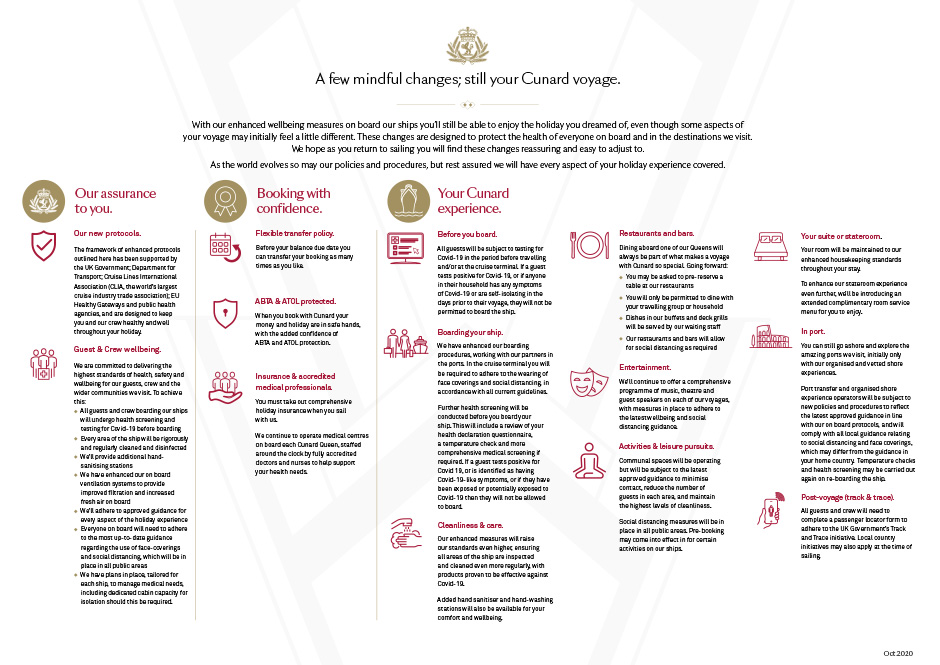 For over a century and a half, the iconic ships of Cunard have been defining sophisticated ocean travel. They have always been The Most Famous Ocean Liners in the World.

From fabled vessels of the past to her present royal court — Queen Mary 2, Queen Victoria and Queen Elizabeth — Cunard has carried guests across the great oceans and to the far points of the globe in unparalleled style. The most glamorous names of yesterday and today have made champagne toasts in her salons, waltzed the night away in her grand ballrooms, savoured grand feasts of the finest flavours in her dining rooms, and whiled away hours immersed in fascinating conversation on her decks.Top destinations include mini cruises within Europe, trips to the Canary Islands and classic transatlantic cruises.

Cunard invites you to take your place in the rich heritage of ocean travel, and write your own classic adventure tale. Join them for a journey on the legendary luxury ocean liner.

Queen Mary 2 is a beautiful ship, a true ocean liner, with bows made to cut effortlessly through the Atlantic waters, and she is just as beautiful on the inside, with the marvellous Grand Lobby and Queens Room housing the largest ballroom at sea, just two of the spectacular public rooms on board.

We had a fabulous time on the Queen Elizabeth in January. It was 4 nights which was a perfect length for us with Amelia (16 months), who has just completed her second cruise. We pulled up in Southampton and they took the luggage and the car which was fantastic. Everything was so efficient and smooth. The ship was out of this world and we were greeted with a harpist.

We had a fabulous time on the Queen Elizabeth in January. It was 4 nights which was a perfect length for us with Amelia (16 months), who has just completed her second cruise. We pulled up in Southampton and they took the luggage and the car which was fantastic. Everything was so efficient and smooth. The ship was out of this world and we were greeted with a harpist.

We spent 4 nights onboard in November 2013 enjoying a mini cruise before the busy Christmas period. It was our second time on Queen Mary 2, or QM2 as she is often referred to, as we spent a few nights onboard back in 2008. That was before I became an independent cruise consultant with GoCruise.

This visit was to be quite a special one, as it was a ship, and indeed a cruise line to which I had never experienced before, and for the fact that it is very rare to be able to visit any ship from the CCS Brands in Scotland, I was quite enthusiastic to attend.

We do not share your email address with any 3rd parties. We carefully tailor our recommendations to your requirements and aim to keep you up to date with the best news, reviews and offers.

Search just by date, refine your search by destination and/or cruise line — or use all the options for a more detailed search.

Price Accuracy: Prices quoted throughout this site are subject to change and the services offered subject to availability. Prices exclude, where applicable, a credit card charge and passenger admin fee. Fred. Olsen Travel trading as GoCruise is a member of ABTA with membership number J5035. As such we are bonded according to ABTA's rules and abide by ABTA's Code of Conduct. ABTA protection applies to services supplied by Fred. Olsen Travel trading as GoCruise, but does not apply to services featured on this web site that are provided by any company that is not a member of ABTA.

Book with Confidence. We are a Member of ABTA (membership no. J5035) which means you have the benefit of ABTA's assistance and Code of Conduct. All the package and Flight-Plus holidays we sell are covered by a scheme protecting your money if the supplier fails. Other services such as hotels or flights on their own may not be protected and you should ask us what protection is available. Check our ABTA membership

For your financial protection and to reassure you of our operating standard we are full members of CLIA (Cruise Lines International Association), ABTA (The Association of British Travel Agents) and act as agents for ATOL holders. Please be aware that GoCruise are acting solely as your booking agent, subject to which all bookings are accepted.

Any travel or destination is copyright of its respective owners. Fred. Olsen Travel trading as GoCruise are not responsible for 3rd party content. Destination and travel advice is subject to change and inaccuracies.

Unless otherwise expressly noted, all prices are per person, based on double occupancy of the stateroom and are quoted in £ sterling. GoCruise reserves the right to increase its prices without prior notice; however, if you have confirmed your booking with a deposit, or if you have already made your final payment, your price will be protected, with the exception of fuel taxes & surcharges, as dictated by the tour operator.